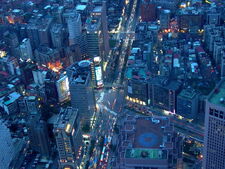 Taipei is the melting pot of Chinese cuisine, the result of refugees from all provinces of mainland China settling in Taiwan after the end of the Chinese Civil War. For instance, despite the traditional Taiwanese aversion to eating beef, beef noodle soup, which was introduced by Nationalist soldiers who settled in Taiwan, is now considered a Taiwanese national dish. Taipei now styles itself as the "Beef Noodle Capital of the World," holding an annual beef noodle festival.

Jade watermelons, longyans, and dragonfruit are in season around August. Do not hesitate to buy fruit from a street vendor. They sometimes even help you cut them into to slices with plastic container. Juice bars are found in most department store food courts. There are stalls that sell freshly pressed sugar cane juice as well as shaved mango ice.

Starbucks and its competitors are ubiquitous in Taipei.

Food courts can be found in the basement of any department store in Taipei. Expect to pay between NT$100-NT$200 for a set meal.

Bento is a single-portion takeout meal that is popular in East Asian country because of its easy-to-go quality. It would be a good way to have a meal done efficiently and if you have budget concerns. You can easily find Bento stores all over the city. One of the most common types are those wrapped in wooden flakes. All convenience stores also sell Bento including beef noodles, and with heating services. Prices of each Bento sold in the Bento stores are around NT$70-NT$120. And those in the convenience stores are around NTD$45-NTD$65. Traditional Taiwanese bentos include pork chop with rice (排骨飯) or chicken leg with rice (雞腿飯) which are both typically served with mustard sauerkraut (酸菜) and semi-pickled cucumbers (煙黃瓜).

Taiwan is also famous for its various street food and night market lives. Among the entire Greater China Region, Taiwan's night markets might be the most distinguished. You can find any knid of local and international tastes here. The most commonly-known Taiwan-owned street food are Oyster omelette(蚵仔煎), Stinky Tofu(臭豆腐), Oyster Vermicelli(蚵仔麵線), and Tempura/Tianbula(甜不辣).

A swastika, which is frequently encountered in Buddhist temples, is sometimes used to indicate vegetarian cuisine. The Chinese character for vegetarianism is 素 (su).

Text with links to user-reviews on other pagesEdit

Retrieved from "https://travel.fandom.com/wiki/Taipei?oldid=53640"
Community content is available under CC-BY-SA unless otherwise noted.