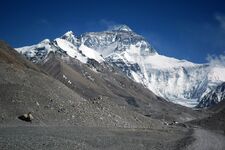 Nepal is a small South-Asian country, landlocked between two Asian giants; China (Tibet) and India. The large natural diversity of Nepal has caused many different types of civilization to develop there. From the heights of the Himalayas to the plains of the Terai regions, Nepal offers amazing and exotic flora and fauna, as well as diverse cultures and languages. The people are very friendly and respect the tourists. Convenient flights are available from many locations in India, and some other countries of South Asia. In case, you desire to savour the beauty of the nature in its splendid glory, you may drive all the way to Kathmandu from many points in India like Birgunj and Raxaul.

Getting to Nepal[edit | edit source]

All visitors to Nepal except the citizens of India and Bhutan, should have valid passports and visas. Visas for entry into Nepal are issued very easily by Nepalese diplomatic offices.

While inside Nepal you may travel by taxis or luxury buses. Some inland flights from Kathmandu to Pokhra are also available. It is always a good idea to cover some distances in the Nepal by road to enjoy the natural beauty of this Himalayan country.

Patan's temples
Add a photo to this gallery

Retrieved from "https://travel.fandom.com/wiki/Nepal?oldid=49421"
Community content is available under CC-BY-SA unless otherwise noted.